Southpaw Ben Whitehurst (Hoggard) held the Queen City offense in check for the second time in five days by scattering five hits in a complete game to lead Wilmington to a 3-0 victory in the tournament title game Saturday at Campbell University. 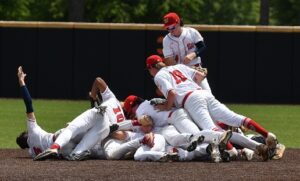 “We had a bunch of kids back from last year’s team that was right there knocking on the door, and I think they came out this summer wanting more,” Wilmington coach Scott Sandlin said. “They came out hungry today and you could tell with their celebration.”

Whitehurst and right fielder Jason Culley (Southeastern CC) are the only members of the 2019 team who are still with the program. Sandlin gives them a lot of credit for passing the culture down to the younger players.

“They were babies on that 2019 team,” Sandlin said. “I can remember Ben pitching against a Fuquay-Varina team that had six or seven Division I kids in their lineup, and he stood toe-to-toe with them.

“Culley was just a reserve outfielder who would come in and run bases and play a little defense for us in those days, and now here he is bookending it with another title. I’m tickled to death for both of those guys.” 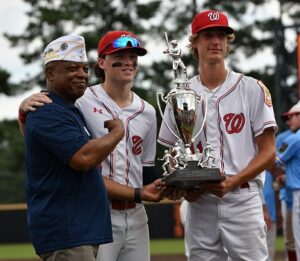 Wilmington will open the Southeast Regional against Florida state champion Belleview Post 284 on Wednesday at 4:30 p.m. in Asheboro.

Whitehurst anchored a pitching staff that allowed only 11 runs in five games at the state tournament. He also tossed 5 1/3 scoreless innings against Queen City in pool play on Tuesday.

Wilmington didn’t get the same kind of offensive output in the championship game as it did in Friday’s 14-4 mercy-rule victory over defending champion Fuquay-Varina, but the three runs were plenty for Whitehurst, who needed only 82 pitches to record 21 outs.

After Korbin Pettigrew (Hoggard) and Logan Ponnett (Hoggard) worked back-to-back walks to begin the bottom of the first inning, shortstop Spencer Nolan (Hoggard) laced a double down the left field line to score Pettigrew with what turned out to be the game-winning run.

Ponnett then scored on an RBI groundout from Bennett McNeill (Hoggard). 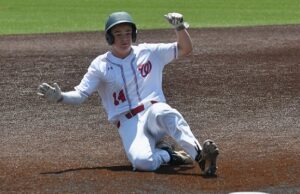 The other run came in the second inning on a sacrifice fly from Pettigrew that allowed Conner Marren (New Hanover) to cross the plate.

Ponnett finished the tournament 6-for-14 with four RBIs and four runs scored, while Marren was 5-for-12 with six runs scored and four RBIs. Pettigrew also scored six times from the leadoff spot.

Wilmington faced some adversity prior to the playoffs when three players were ruled ineligible. Starting catcher Jack Cuba (New Hanover) was also lost for the season with a leg injury.

Those setbacks didn’t alter the goals for a program that enters every season with asperations of reaching the World Series for a third time.

“There were a lot of subplots that went into the fuel to do this, but the bottom line is we have a bunch of good kids who just would not give up,” Sandlin said. “I’m as proud as I could be of them.”