How they got here

A look at the series

This is an interesting matchup between two teams that have advanced deep in the playoffs for the first time in more than a decade.

Dating back to 2010, South Central had only reached the third round once prior to this season, and that came in 2014. South Brunswick made it to the second round in 2010 and 2013.

South Central has never played for a state title, while South Brunswick won the 2A championship in 1988 by sweeping Charlotte Catholic (10-4 and 8-6). 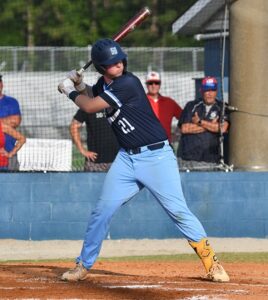 Past results haven’t matter to either team this season, as both have reached the 20-win mark and shared their regular season conference title.

South Central got revenge on its county rival in the third round of the playoffs with a dramatic 5-3, 11-inning victory. Seniors Trace Baker and Daylinh Nguyen-Brown combined for 12 strikeouts on the mound. Baker also had three hits, including a home run, and three RBIs.

South Brunswick went 11-3 in the mighty Mideastern 3A/4A Conference, which saw seven of its eight teams qualify for the playoffs. The Cougars shared the title with New Hanover even though they swept the season series.

It’s been a pretty comfortable road through the playoffs. South Brunswick has played 10 less innings than South Central thanks to a pair of five-inning mercy-rule wins and a four-inning weather impeded win against Fike in the second round.

Based on the season stats, this series looks to be extremely even.

Bouche and Baker are also the anchors of a talented pitching staff that has a 2.02 ERA and 219 strikeouts in 162 2/3 innings.

Walker Jenkins is arguable the top junior in the country. The UNC commit has a .521 batting average to go along with nine doubles, two triples, 10 home runs, 16 stolen bases, 37 RBIs and 41 runs scored. 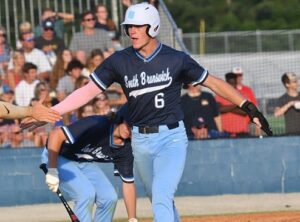 If the Falcons decide to pitch around Jenkins, they will be forced to face ECU signee Cameron Burgess and hit .429 average. Burgess has eight doubles, four home runs and 33 RBIs.

Burgess and UNCW commit Aubrey Smith make up one of the best 1-2 pitching combos in the state. 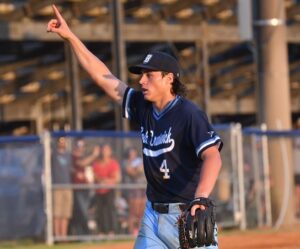 UNCW commit Aubrey Smith is 2-0 with a save and a 0.70 ERA in the playoffs. [Tim Hower/Coastal Preps]

The mercy-rule victory over West Carteret in the third round means coach Mike Anderson has both pitchers available for Game 1.

Hartman, Alex Sanchez and Jordan Daniels are options out of the bullpen.