Wilmington Post 10 collected 11 hits, but finished just 2-for-14 with runners in scoring position in Wednesday’s 8-5 loss to Belleview (Fla.) Post 284 on the opening day of the American Legion Baseball Southeast Regional in Asheboro.

“We just didn’t play very clean today, but we’ll bounce back tomorrow,” Wilmington coach Scott Sandlin said. “I told the guys after the game the only difference from the state tournament was we lost on the second day there and we lost on the first day here.

“Nothing changes and we still have to play the same numbers of games to win it. We’re just going to have to be a little sharper from here on out.” 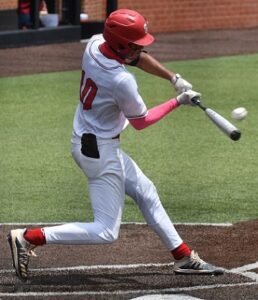 McNeill belted a solo home run to begin the fourth inning. He led off the sixth inning with a triple before scoring on a sacrifice fly from Conner Marren (New Hanover).

Wilmington (22-10) got off to a fast start when Pettigrew opened the game with a base hit up the middle. Ponnett followed with a double to put runners on second and third with no outs.

A sacrifice fly from Spencer Nolan (Hoggard) allowed Pettigrew to score the first run of the game. Ponnett advanced to third base on the same play, but was stranded.

It was a sign of things to come. Wilmington left at least one runner on base in every inning except the second.

Belleview grabbed a 5-2 lead with a three-run bottom of the second inning despite managing only one hit. They worked a pair of walks and had three batters reach base on a hit by pitch.

The advantage grew to 8-3 after five innings. Wilmington chipped away by scoring a pair of runs in the sixth. Following Marren’s sac fly, Jaxson Croom (Hoggard) doubled and crossed the plate on a single from Jason Culley (Southeastern CC).

Ponnett led off the seventh inning with a single to left field. Nolan reached base on an error and Kayden Crawford beat out an infield single to load the bases with two outs.

Marren hit a ball to the gap in left-center that nearly fell and surely would have tied the score, but Belleview center fielder Mike Dobkowski made a diving catch to end the game.

Dobkowski also hit a two-run home run in the bottom of the first inning. He went 2-for-3 with four RBIs. Leadoff batter Ryan Braddock finished 2-for-4 with two runs scored.