Wilmington Post 10 is the most decorated American Legion Baseball program in the state. They’ve won a record 12 state titles, including the past two (2018 and 2019).

Now, a new group of players will look to carry on the legacy. Wilmington (12-0) won the Area II title to earn a berth in the state tournament for the 12th time in 13 years.

The other two teams in the Stripes pool are Area I champion Fuquay-Varina Post 116 and Area III runner-up Kannapolis Post 115. The top two teams will qualify for Saturday’s semifinals.

Since the 2020 season was canceled due to COVID-19, Wilmington lacks the state championship experience it usually has. Only three players on the current roster – Jason Culley (Hoggard), Chase Hardee (New Hanover) and Ben Whitehurst (Hoggard) – were on the 2019 team that cruised to an 11-5 victory over Fuquay-Varina in the championship game. 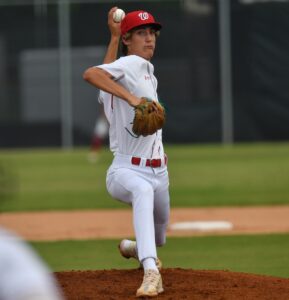 Wilmington’s 2019 team had a potent offense that scored 46 runs in six games (9.2 per game) at the state tournament to claim a second straight title.

This year’s lineup doesn’t have the same kind of firepower, but Wilmington has still managed to average 9.7 runs over 11 games (one win came via forfeit against Jacksonville Post 265).

“We’ve always gone into each season wanting to have a number of different ways to beat you, whether it was with the short game or we’re real aggressive on the bases or we’re letting our big guys get to the plate and drive the baseball,” Sandlin said. “I feel like we’ve got a little bit of all of that with this year’s team.”

Catcher Drew Tyndall (Ashley) has had a terrific summer in his first season with the program. In addition to being one of the team’s top hitters, Tyndall has been exceptional behind the plate. 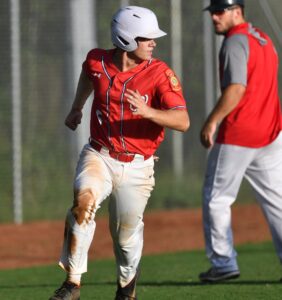 Drew Tyndall has been one of Wilmington Post 10’s best hitters this summer. [Tim Hower/Coastal Preps]

“I typically lead by action since I’m not a loud kind of guy,” Tyndall said. “I think we can have success up there this week if we stay composed.”

Wilmington’s deep pitching staff, which is anchored by Whitehurst and Tanner Collins (Ashley), has allowed only 12 runs all season.

“Teams can sometimes run out of arms, but I feel like we’ve got plenty,” Whitehurst said. “Everybody who has pitched has done great this summer.”