As basket after basket went in, Brogden Hall got louder and louder.

Thursday’s rivalry game between Hoggard and New Hanover didn’t have a capacity crowd like so many previous matchups, but the noise from the Wildcat faithful brought back memories from the 2007 and 2012 state championship seasons.

Both of those teams would ignite the crowd by going on quick runs that deflated their opponent. The same thing happened Thursday.

New Hanover scored on eight of nine possessions over the final five minutes of the first half to pull ahead for good in a 59-46 victory that gave them the Mideastern Conference regular season title. 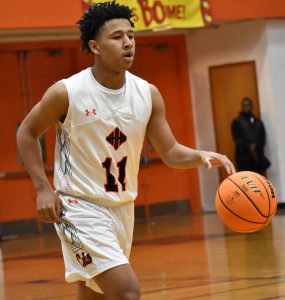 “This one is special because we weren’t supposed to do that with the youth we have,” New Hanover coach Kirk Angel said. “They’ve grown and grown and grown.”

Hoggard junior Brady Rankin converted a putback to cut the deficit to 18-16 before Dee Barnett answered on the other with a three-point play to ignite a 22-4 run that the Wildcats (18-5, 13-1) a 20-point halftime advantage.

All 22 points were scored by Barnett (8), Scotty Deffinbaugh (9) and Mikai Stanley (5). All three finished in double figures with Stanley leading the way with 20 points and 11 rebounds.

Barnett added 14 points, four assists and two rebounds and Deffinbaugh had 13 points, three rebounds and three assists. Abrahm Drive scored all eight of his points in the second half.

“That’s what we do is get stops and keep scoring,” Stanley said. “I was fired up because it was the last time I was playing with my brothers in the regular season. It was definitely emotional, but you can’t get too high or too low.” 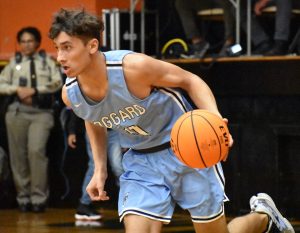 “You can’t give Brady any room,” Angel said. “We went under one ball screen and he shoots it from the volleyball line. To see his development from the first time I saw him play to now is crazy.”

New Hanover will be the top seed at next week’s Mideastern Conference Tournament, which will be played Monday, Wednesday and Friday at Brunswick Community College. They will open with No. 8 North Brunswick.

Hoggard will take on the No. 7 seed, which will either be Ashley or South Brunswick. A draw will take place Saturday morning to determine that.

What started as a bump on Alex Jones' knee progressively got worse until the swelling and pain were too much for him ... Read More
Feb 3, 2020   |   Swimming

List of area track & field athletes in college in 2020

New Hanover, Brunswick and Pender counties produce a large number of athletes that continue their careers at the next level. Here is ... Read More