The return of senior Lydia Bradshaw from Wilmington Christian Academy as well as the addition of freshman Laney Scoggins gave the team one of the best duos in the league. The showed off their skills Friday night by combining for 37 points to lead the Scorpions to a key early-season 58-46 victory over New Hanover. 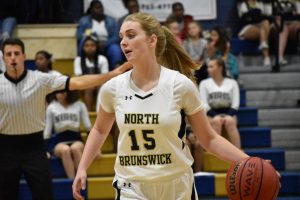 It was North Brunswick’s first win over a New Hanover County public school since 2015 (55-53 in overtime against Ashley) and first since joining the Mideastern Conference for the 2017-18 season.

“The 3A portion of the conference is very balanced this year, so to start off with two wins (they beat South Brunswick 46-44 in overtime Tuesday) is big not only from a record standpoint but also from a confidence standpoint,” Fortune said. “The 4A teams are going to be tougher for us, but we’re going to compete every night and hopefully we can sneak a win against one of those 4A schools and continue to take care of the 3A side and try to sneak into the playoffs.”

The contest was sloppy from start to finish, as the teams combined to commit 59 turnovers. The Scorpions (6-2, 2-0) took care of the ball better down the stretch and Scoggins scored 10 points in the final five minutes to seal the victory.

The score remained tight and a 3-pointer off the glass from Tamia Marshall got the visitors to within three with 6:10 remaining.

That’s when Scoggins took over. She buried a pair of free throws and converted a three-point play on the ensuing possession to spark an 11-1 run that put the game out of reach. 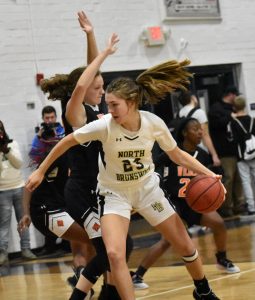 “I expect a lot from myself, so I have a mindset every game that I’m going to go out there and do what I know I’m capable of doing,” said Scoggins, who has reached double figures in six straight games.

Bradshaw had a big opening half, scoring 12 of her 17 points in the first 16 minutes. Her 3-pointer with 3:30 left in the third quarter stopped the Wildcats’ big run.

New Hanover, which played without leading scorer Andrehya Shuford, got 11 points from Mokyla Taylor  as well as eight a piece from Marshall and Destiny Newkirk. The Wildcats host Topsail on Tuesday night at 6 p.m.

Nyah Perkins scored 12 of her season-high 13 points in the second half for the Scorpions, who travel to Wallace-Rose Hill on Friday at 6 p.m.

***Click here to view a gallery of 70 photos from the action*** A pair of course records at Hugh MacRae Park were ... Read More