Soph. pitcher Zach Kelly, Queens (2018 South Brunswick grad): Got the start but didn’t factor into the decision Sunday despite striking out 10 and allowing only two earned runs in five innings against Mars Hill.

Soph. pitcher Price King, Brunswick CC (2018 Ashley grad): Picked up the victory in a 8-4 win at Lenoir CC on Feb. 29 by allowing one earned run and striking out nine in five innings.

Soph. outfielder Parker Nolan, Davidson (2018 Hoggard grad): Helped the Wildcats go 5-3 over an eight-game stretch by hitting .290 (9-for-31) with three walks, one double, one triple, four home runs, 12 RBI and seven runs. He had a pair of home runs and five RBI in a win over Lafayette on March 1. 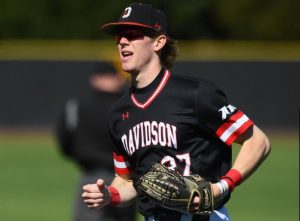 Jr. outfielder Rob Wilkerson, Methodist (2017 Hoggard grad): Continued his tremendous start to the season by hitting safely in six of seven games. He had a .296 average with four walks, one double, eight RBI and seven runs.

Fr. attack Eli Copeland, Lander (2019 Topsail grad):  Found the back of the net a career-high four times and added a pair of assists in a 23-10 victory over Mars Hill on Feb. 29. 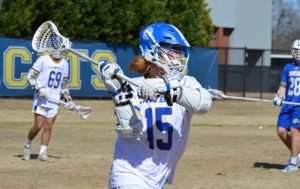 Jr. midfielder Finn McGrady, William Peace (2017 Laney grad): Had a hat trick to help the Pacers earn a 12-9 win over Emmanuel on Sunday.

Jr. Jathan DeBerry, UNC Pembroke (2017 North Brunswick grad): Won the 110-meter hurdles in 15.44 and placed third in the high jump (6-4) at Friday’s Braves Classic, which was hosted by UNC Pembroke.

Soph. Adam Hart, Western Carolina (2018 Topsail grad): Earned a fourth-place finish in the weight throw (51-7) and was eighth in the shot put (45-1) at the Southern Conference Indoor Championship, which was held in Lexington, Va. on Feb 29 and March 1.

Fr. pitcher Morgan Beeler, Lenoir-Rhyne (2019 West Brunswick grad): In a doubleheader at King on Thursday, Beeler pitched a total of 8 1/3 innings and didn’t allow an earned run. She lowered her season ERA to 2.94.

Soph. utility Alleigh Clayter, Louisburg (2018 Laney grad): Cleared the bases with a double to help the Hurricanes secure a 14-1 win over Fayetteville Tech on Friday.

Sr. pitcher/infielder Preston Ellenberg, Catawba (2015 North Brunswick grad): Tossed a complete game and allowed only one run on four hits with seven strikeouts in a 2-1 victory at Belmont Abbey on Feb. 27.

Soph. catcher/infielder Alleigh Himes, Winston-Salem State (2018 North Brunswick grad): In a pair of losses to Bloomsburg on Sunday, Himes went 4-for-6 with two walks, one home run, four RBI and three runs. She belted a grand slam in the third inning in Game 1 of the doubleheader.

Sr. pitcher Myah Morse, Meredith (2016 West Brunswick grad): Allowed only one hit in five shutout innings to guide the Avenging Angels to a 9-0 win over Shaw on Feb. 27.

Sr. infielder Danielle Parks, King (2016 Topsail grad): In two-games series against Lenoir-Rhyne and Shepard, Parks had a .364 batting average (4-for-11) with five RBI and two runs.

Soph. outfielder Kaitlyn Rhea, Brunswick CC (2018 West Brunswick grad): Blasted a two-run homer in the first inning and added an RBI single in the fifth in a 9-4 loss at Fayetteville Tech on March 1.

R-Sr. G Jada Bacchus, Mount Olive (2015 Ashley grad): Scored a team-high 23 points on 11 of 21 shooting and also grabbed seven rebounds in her final collegiate contest on March 3 in the quarterfinals of the Conference Carolinas Tournament.

R-Fr. G Jenson Edwards 2018, High Point (Laney grad): Had a tremendous two weeks, playing all but two minutes and averaging 14.5 points, 8.5 rebounds and 3.5 assists. She had back-to-back double-doubles against Longwood (86-79 win on Feb. 29) and Charleston Southern (71-55 win on Wednesday) and scored a season-high 18 points against UNC Asheville (89-62 win on Saturday). Edwards was named the Big South Freshman of the Week on Sunday. 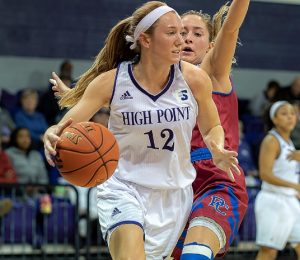 Soph. Sarah Funderburg, Winthrop (2018 Wilmington Christian Academy grad): Was the Eagles’ top finisher at the Kiawah Island Classic in South Carolina on March 1-3. Funderburg had rounds of 73, 75 and 78 to finish tied for 74th in the field of 264 players.

Soph. midfielder Alyssa Cooke, Presbyterian (2018 Hoggard grad): Had her first collegiate hat trick in a 14-9 loss at Butler on Satuday.

Jr. midfielder Kendall Goldblum, American (2017 Hoggard grad): Scored at least five goals in all three victories. She had six a piece against George Washington on Feb. 26 and Wofford on Saturday and found the back of the net five times against Long Island on Feb. 29. Goldblum also had 21 total draw controls. 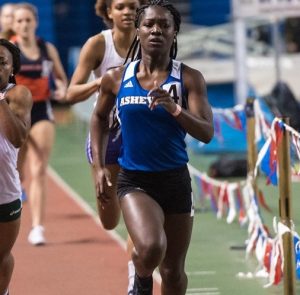