Jr. pitcher Caleb Bishop, Mount Olive (2017 New Hanover grad): Has yet to allow an earned run in six innings over two appearances to open the season. Bishop has three strikeouts and no walks.

Sr. outfielder Max Johnson, N.C. Wesleyan (2015 New Hanover grad): Got off to a great start by hitting .600 (6-for-10) with two walks, one home run, four runs, one RBI and five stolen bases from the leadoff spot in the first three games of the season. 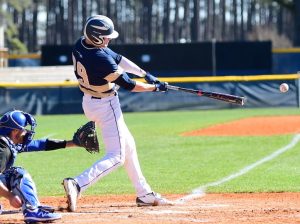 Sr. pitcher Payton Rice, Embry-Riddle (2016 Topsail grad): Picked up his first victory of the season by allowing one earned run on four hits with nine strikeouts in six innings in 7-3 win over Valdosta State on Feb. 1.

Jr. outfielder Rob Wilkerson, Methodist (2017 Hoggard grad): Went 3-for-5 with a double, triple, two RBI and two runs on Sunday to help the Monarchs pick up an 11-8 victory over Texas Lutheran.

Soph. G/F Josh Aldrich, USC Upstate (2018 New Hanover grad): In a 91-74 home win over Campbell on Feb. 1, Aldrich scored eight points on 4 of 4 shooting and grabbed seven rebounds in 23 minutes off the bench.

Sr. C AJ Frye, N.C. Wesleyan (2016 Hoggard grad): Poured in a career-high 43 points and grabbed nine rebounds in a 110-98 loss at Pfeiffer on Feb. 1. Frye finished 17 of 25 from the field and 9 of 11 from the free throw line. In Saturday’s win over Berea, he had another big performance with 23 points, seven rebounds and six assists.

Sr. Blake Taylor (2016 Wilmington Christian Academy grad): Shot a final round 69 to finish tied for 22nd at the Sea Best Invitational in Ponte Vedra Beach, Fla. on Tuesday. Taylor made five birdies and finished the tournament at 2-over-par.

Jr. De’Shawn Ballard, Appalachian State (2017 Laney grad): Broke the school record in the 200-meter dash at the New Mexico Collegiate Classic over the weekend with a time of 21.18 seconds in a fifth-place finish. He was also 18th in the 60-meter dash with a time of 6.93 seconds. 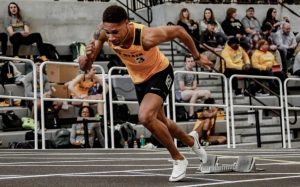 Jr. Jathan DeBerry, UNC Pembroke (2017 North Brunswick grad): Had a pair of fifth-place finishes in the 60-meter hurdles (8.49) and high jump (6-2.75) at the Buccaneer Invitational at East Tennessee State.

Sr. pitcher/infielder Preston Ellenberg, Catawba (2015 North Brunswick grad): Went 1-0 in the circle with an ERA of 1.56 and 10 strikeouts in nine innings in two starts to help the Indians open the season with four victories. 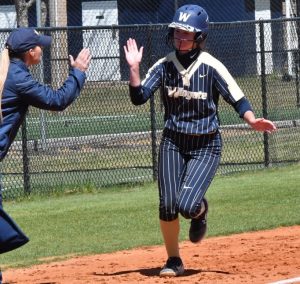 Jr. outfielder Hayley Grizzle, Barton (2017 Topsail grad): Went 3-for-7 with a double, three runs, two RBI and a stolen base in four victories to open the year.

Soph. catcher/infielder Alleigh Himes, Winston-Salem State (2018 North Brunswick grad): Tied the game at 4-4 in the fifth inning with a 2-run homer in an 8-4 win over Alderson Broaddus on Saturday.

Fr. G Blair Barefoot, Lenoir-Rhyne (2019 Hoggard grad): Played a season-high 26 minutes and finished with eight points and three assists to help the Bears rally for a 56-52 win over Lincoln Memorial on Wednesday.

R-Fr. G Jenson Edwards 2018, High Point (Laney grad): Was on the court for more than 30 minutes in all four games and finished with 20 points, 13 assists, 12 rebounds and four steals.

Soph. F Kapria Pressley, Brunswick CC (2014 New Hanover grad): Scored a game-high 34 points to go along with six rebounds, four assists and three steals in a loss to Louisburg on Wednesday. In three games, Pressley averaged 24.7 points and 4.3 rebounds while shooting 60 percent (33 of 55).

Fr. midfielder Megan Trout, Gardner-Webb (2019 Ashley grad): Registered her first career goal in Friday’s 22-7 loss at Duke. Trout also found the back of the net and had three draw controls on Sunday in a dominant 19-3 victory over Howard. She has two goals on two shots on the season. 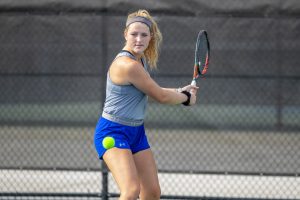 Fr. Courtney Lines, UNCW (2019 North Brunswick grad): Had a distance of 17-9.75 to finish second in the long jump at the Roanoke College Invitational Challenge on Feb. 1.

Fr. Maddie Norr, UNCW (2019 Hoggard grad): Earned 2.5 points for the Seahawks with a sixth-place finish in the high jump (4-9) at the Roanoke College Invitational Challenge on Feb. 1.

Soph. Jelonnie Smith, Appalachian State (2018 South Brunswick grad): Finished third in the 200-meter dash with a time of 25.54 at the Buccaneer Invitational on Feb. 1 and was on the third-place distance medley relay (12:05.60) at the South Carolina Invitational over the weekend.

Jr. Jonathan Miller, UNC Pembroke (2015 Laney grad): Helped the Braves win the Mountain East Conference Championship on Feb. 1 by finishing as the runner-up at 141 pounds. Miller also picked up an 8-3 decision in a 43-0 win over Lander on Wednesday.