The senior standout led off the bottom of the first inning with a long home run and tossed a 1-hit shutout with eight strikeouts to lead the seventh-seeded Vikings to a 2-0 victory over No. 10 Jack Britt in the first round of the NCHSAA 4A playoffs.

“I knew they were going to give me something inside, so I was just looking for it,” said Tresvik, who is now hitting .595 with nine home runs on the season. 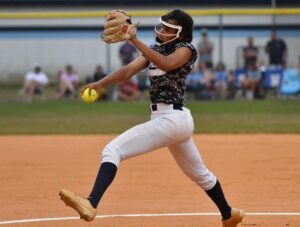 COVID-19 forced the 2020 softball season to be canceled, so Hoggard (15-0) was forced to wait longer than normal for its return to the postseason.

Back in 2019, an extremely young team exceeded expectations by advancing all the way to the 4A State Championship Series. Those young players are now upperclassmen and they know they have a target on their back every time they take the field.

“Two years ago, we had no clue we would go to the state championship,” said junior catcher Sydney Short. “It’s a completely different hunger and intensity this year. We want it so much more.”

Short drove in the only other run with a single to left field in the third inning. It scored Allie Royal, who ripped a two-out double to the gap in right-center field. Royal collected two of the Vikings’ four hits.

Two runs of support was more than enough for Tresvik, who was forced to work out of a couple jams of her own doing.

She walked the bases loaded in the third inning, but struck out Cameron Davan for the third out. An inning later, Jack Britt (9-4) had runners on second and third with one out. Tresvik got out of it unscathed thanks to a pop up to shortstop Skyler Walker followed by a lineout to Royal at first base.

Tresvik’s final jam of the evening came in the sixth inning following a lightning delay. On the first pitch back from the delay, Alyssa Brown singled to right field to put runners on the corners with one out. A lineout to Royal and a strikeout kept the Buccaneers off the board.

She retired Jack Britt in order in the seventh inning to finish off the victory.

“Before every pitch I take a deep breath and clear my head,” Tresvik said. “This year, I’m not focusing only on my hitting. If I don’t have a good hitting night I’m okay with it as long as I doing a good job pitching.”

Hoggard will travel to No. 2 Holly Springs on Wednesday at 6 p.m.

Hoggard hosted New Hanover on April 5, 2021 ***Click here to buy digital files or photo prints of any of the photos ... Read More