“We had pretty big expectations,” said senior Thomas Teeters, who won four events. “We felt pretty good as a team not only because of how hard we’ve practiced, but also because we’ve bonded so well.” 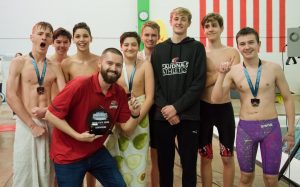 Teeters broke the state record in the 200 freestyle with a time of 1:47.54. He also won the 500 freestyle, which he already held the record for, and was on the victorious 200 medley relay and 200 freestyle relay. Both set new state records.

“Having teammates there encouraging you is great,” Teeters said. “There were swimmers my age and swimmers a few years younger than me, so it was good to set a good example and encourage them and also be encouraged by my fellow teammates.”

Fields also had a third-place finish in the 50 freestyle and Laith Ausband placed third in the 500 freestyle.

The Cardinals narrowly missed out on a title in 2019, finishing one point behind Forsyth Homeschool. 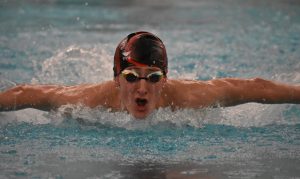 “We treated it pretty competitively, but we also wanted to have a good time and enjoy the races,” Teeters said.

On the girls side, the Cardinals came in third thanks to a pair of individual wins from Elizabeth Teeters. She touched the wall first in the 200 freestyle and 500 freestyle.

Teeters was also the anchor for the 400 freestyle relay that finished second. Joining her on that team were: Emmie Backman, Anna King and Joy Shaver.

Backman finished third in the 500 freestyle.