GREENSBORO | A trio of area wrestlers accomplished their ultimate goal of winning a state championship Saturday night at the Greensboro Coliseum.

Laney senior Marcus Mondragon and North Brunswick senior Bryan Aragao ended their high school careers on a high note and Laney sophomore Mark Samuel earned the first of what could be multiple titles.

“It was a priority to break him early and build a lead as quick as I could,” Mondragon said. “I was able to build the lead by capitalizing off his mistakes and working as hard as I could.” 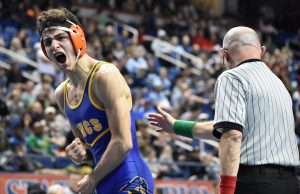 His second takedown of the first period also came with a set of two nearfall points to extend the lead to 6-3. Mondragon had a pair of escapes in the second period and two more nearfall points in the third for his 10 points.

He joined his brother, Joe, as a NCHSAA state champ. Joe claimed his title at 132 pounds in 2015 while at Ashley.

“It means so much to me,” Mondragon said. “It’s the greatest feeling in the world.”

Aragao capped an unbeaten season with a comfortable 6-2 decision over West Carteret’s Jake Reynolds in a rematch of last week’s 3A East Regional final to capture the 3A title at 182.

“I had never placed, so this was a new environment and I got off my game plan and was a little more cautious than normal,” said Aragao, who won by major decision a week ago. 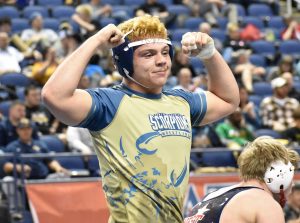 After a scoreless opening period, Aragao was issued the first point after he was illegally slammed. He then got another point with an escape and increased the advantage to 4-0 with a takedown.

He sealed the victory with another takedown with 12 seconds remaining in the match. It capped an amazing journey for a young man who weighed 265 pounds and struggled to earn victories just a few seasons ago.

“It means a lot, especially coming into the sport late and not having as much experience as kids who have wrestled their whole lives,” Aragao said. “I had to make up a lot in a short amount of time, but now I can call myself a state champ.”

A year removed from a fifth-place finish in his first trip to states, Samuel also capped an unbeaten season with a dominant 7-2 victory over Hough’s Brandt Fajerman to capture the 4A title at 106.

“I wanted to come back stronger, so I made sure to train as hard as I could for this moment right here,” Samuel said. “I’m glad my friends were there to help me too. All their help and support got me to where I am.”

After a few failed attacks, Samuel got the opening takedown of the match with six seconds remaining in the opening period. He needed only 13 seconds to earn a reversal in the second period and double the lead to 4-0.

“I wanted to get out to a lead quickly, so I started on the offense and going after as many opportunities as I could, Samuel said. “I was finally able to get a takedown after we scrambled for a few seconds and from there I tried to keep him down.” 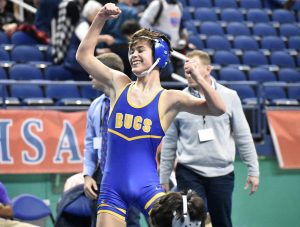 Samuel then capped the victory with an escape and another takedown in the final period.

Laney finished second in the 4A team standings with 109.5 points. Hough, which also claimed the dual team title, won with 113.5

North Brunswick’s Hunter Campbell was fourth in 3A at 145 and Emmanuel Bell finished fourth in 4A at 285.