What started as a bump on Alex Jones’ knee progressively got worse until the swelling and pain were too much for him to take.

A middle of the night visit to the hospital in early January showed the Topsail three-sport standout had a MRSA infection and would require surgery. With two-thirds of the wrestling season already completed, Jones wasn’t sure if he would be able to finish out his senior season.

“I did not know MRSA was even a thing,” said Jones, who also plays football and lacrosse and signed a lacrosse scholarship with Barton on Tuesday. “Honestly, I didn’t think I would be able to wrestle again, but when the doctor told me after surgery to give it about three weeks I was surprised.” 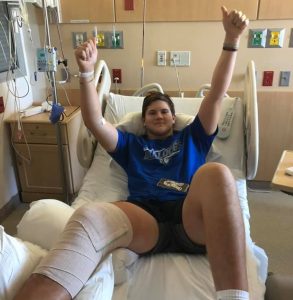 Jones, who is only in his second year on the mat, had successful surgery on January 8 and exactly three weeks later he earned a 49 second pin against Ashley on Senior Night.

Thanks to his coaches and teammates, Jones quickly got back into wrestling shape and surprising won the 3A East Regional title at 220 pounds last week despite going into the tournament unseeded.

Jones took down the top three seeds (including two by pin) to become one of five Topsail wrestlers to qualify for the 3A State Championship, which gets underway Friday at the Greensboro Coliseum.

He pinned his first two opponents before advancing to the finals with a 3-2 overtime victory over second-seeded Luke Kittrell of East Wake. In the finals, Jones pinned previously unbeaten and top-seeded Terrence Raspberry of Southern Nash in 3:54.

“I knew at regionals it could either be my last time wrestling or I could get another week, so I was really motivated,” Jones said. “I was pretty nervous going into the finals because he was undefeated and I didn’t know anything about him. I got in the match and immediately knew I could do it.” 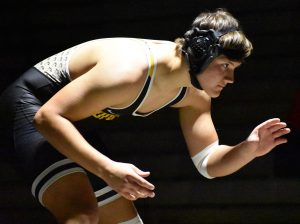 Alex Jones enters the 3A State Championship with a 29-10 record. [Tim Hower/Coastal Preps]

Jones enters the state championship with a 29-10 record and a legitimate shot to finish as one of the six wrestlers on the podium. He opens against Union Pines’ senior Jaheem Uzzell (16-4), who was fourth at the 3A Mideast Regional.

Three other Pirates – freshmen Ethan Blevins (106) and Alex Hopper (138) and junior Daniel Arredondo (126) – will also be making their first trip to states. Senior Baker Baker also qualified at 120 and is looking to improve upon last year’s third-place finish.

“A lot of people didn’t even think I was going to be able to make it past regionals and I ended up winning it,” Jones said. “Now, I don’t think a lot of people expect me to be a competitor at states, but I want to go up there and do well.”