The most successful coach in the history of Pender High School is coming back home.

Chris Hobbs of HobbsDailyReport.com was the first to announce that Tom Eanes resigned from Bandys on Thursday. Eanes will introduced as the new coach of the Patriots during a press conference on Friday at 11:15 a.m. 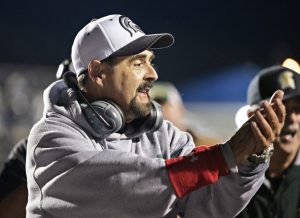 Tom Eanes will be named the new football coach at Pender on Friday. [Photo courtesy of Michelle Thompson]

Eanes spent seven seasons at Pender, compiling a 58-37 from 2004-10. He guided the program to its only three double-digit win totals, including a school record 12 victories and a berth in the 1AA state title game in 2010.

“Even after I left in 2010, I said I would always bleed red, white and blue because the place meant a lot to me,” said Eanes, who will also teach weightlifting. “I had some of the greatest young men I ever coached in my life from there. I hope we can start rebuilding some of that and have some fun.”

A master of the triple-option offense, Eanes has a knack for turning programs around. Before his arrival at Pender, they only had one winning season since 1981. He went 4-8 in each of his first two seasons before finishing with a winning record and at least eight victories over his final four years.

Pender hasn’t had a winning record since Eanes left, going a combined 23-79 over the past nine seasons.

They are coming off a 2-9 campaign under third-year coach Tim Smith, who announced his resignation in early December.

Running back Jadon Lee could flourish in a new system. He finished with 1,122 yards and 11 touchdowns as a sophomore, including a school record 403-yard performance on 36 carries in a 47-7 victory over Lejeune on Nov. 8.

“We always tell our quarterbacks you have to do it 1,000 times before it becomes natural, so it won’t be an overnight thing,” Eanes said about implementing his system. “The good thing is we have a little time in the spring and then all summer to work with them. There will be some growing pains, but they have some good kids coming back and we just need to get more kids out.”

Eanes left Pender to go to Ashley, where he went 8-22 in three seasons. He then moved on to Patton and finished with a record of 22-26 in four years before going 17-9 in his two years at Bandys.