Sr. pitcher Payton Rice, Embry-Riddle (2016 Topsail grad): Had a pair of six-inning starts and allowed only three earned runs while striking out 12 to lower his season ERA to 2.84. 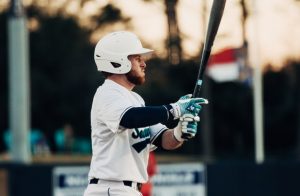 Soph. catcher Matt Suggs, UNCW (2018 Hoggard grad): Through the first eight games of the season, Suggs leads the Seahawks with an on-base percentage of .538 thanks to four hits and eight walks.

Sr. G Qadhafi Turner, Brevard (2016 Ashley grad): On Senior Day, Turner tied his career high with 20 points, all in the second half, and added five steals in a come-from-behind 84-80 victory over Huntingdon on Saturday.

Fr. Harrison Wierse, Barton (2019 Topsail grad): In his first spring tournament, Wierse finished tied for 10th by finishing at 8-over-par during the three round Lincoln Memorial University Spring Intercollegiate Kickoff that concluded on Feb. 11. Wierse had rounds of 73, 74 and 77. 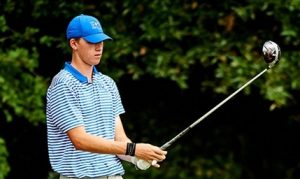 Soph. attack Cole Boggio, Roanoke (2018 Cape Fear Academy grad): Finished with one goal, one assist and two ground balls in a season-opening loss to Christopher Newport on Wednesday. In Saturday’s 14-6 victory over Sewanee, Boggio had an assist and three ground balls.

Jr. midfielder Finn McGrady, William Peace (2017 Laney grad): In Saturday’s 12-11 loss at Ferrum, McGrady had a goal as well as a pair of assists.

Soph. attack Gunner Philipp, Army (2017 Hoggard grad): Scored a career-high two goals in a 15-4 win over Rutgers on Feb. 15 and found the back of the net once in Sunday’s 9-7 loss at Syracuse.

Soph. attack Brewer Warlick, William Peace (2018 Laney grad): Found the back of the net twice on only three shots to help the Pacers secure their first win of the season on Feb. 16.

Jr. Jathan DeBerry, UNC Pembroke (2017 North Brunswick grad): Claimed the 60-meter hurdles title at the Mountain East Conference Indoor Championship with a time of 8.20 and was also fourth in the high jump (6-5.5) to help the Braves finish second as a team.

R-Sr. Dandrell Utley, Charlotte (2015 New Hanover grad): Helped the 49ers wins the Conference USA Indoor Championship on Sunday by finishing fourth in the triple jump with a personal-best distance of 48-8.

Sr. pitcher/infielder Preston Ellenberg, Catawba (2015 North Brunswick grad): Earned a complete-game victory by allowing two runs and striking out four in a 7-2 win over UNC Pembroke on Feb. 16. Ellenberg struck out 12 and allowed only two runs in 6 2/3 innings in a 2-1 loss to Young Harris on Saturday. 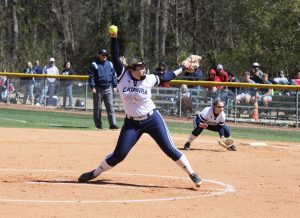 Soph. outfielder Cierra Watts, Coker (2018 West Brunswick grad): Hit .444 (4-for-9) with one double, three RBI, one run and one stolen base in two wins over Fairmont State and a loss to Mount Olive.

R-Sr. G Jada Bacchus, Mount Olive (2015 Ashley grad): In a Senior Night victory over North Greenville on Saturday, Bacchus had a double-double of 21 points and 10 rebounds. She averaged 17.7 points and 9.3 rebounds in three contests.

Jr. G Ayonna Cotten, Mississippi Valley State (2017 New Hanover grad): Finished with a team-best 21 points by hitting a pair of 3-pointers and going 9 of 10 from the free throw line in a home loss to Texas Southern on Saturday.

Fr. midfielder Delaney Popella, Lynn (2019 Topsail grad): In her first collegiate game as well as the first in program history, Popella scored three goals and added an assist and three ground balls in a 16-11 loss against Roberts Wesleyan on Thursday. 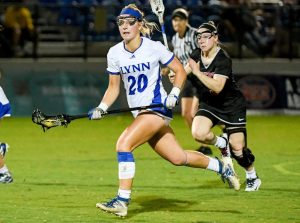 Fr. Caroline Flax, UNC Pembroke (2019 Hoggard grad): Helped the Braves claim the title at the Mountain East Conference Indoor Championship by finishing in a tie for third in pole vault (10-10).

Fr. Courtney Lines, UNCW (2019 North Brunswick grad): Finished fourth in the long jump with a distance of 18-2.5 and was sixth in the 200-meter dash with a time of 26.6 at Saturday’s Bahamas House First Chance Meet in Daytona Beach, Fla.

Fr. Addi Teter, Montreat (2019 Coastal Christian grad): Was on the third-place 4×800 relay that finished with a time of 10:36.04 at the Appalachian Athletic Conference Indoor Championship.

Softball leaders will be updated each Wednesday throughout the season. Stats are compiled from MaxPreps as well as emails from coaches. Teams ... Read More
Apr 26, 2021   |   Boys Tennis